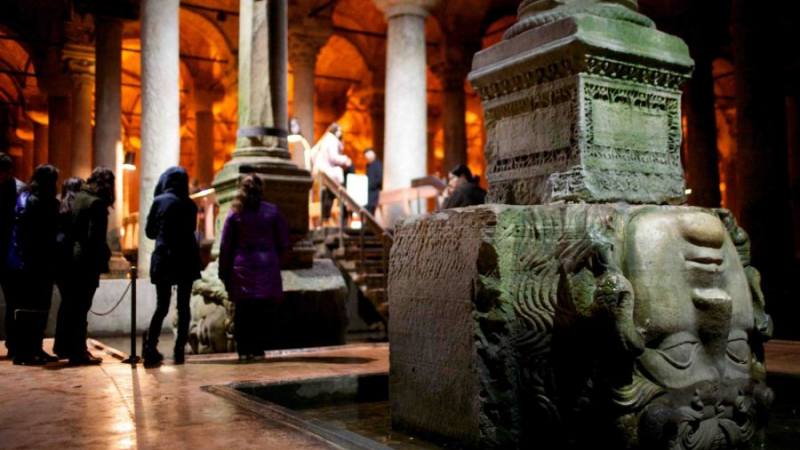 One of the magnificent ancient buildings of İstanbul is the Basilica Cistern located in the southwest of Hagia Sofia. Constructed for Justinianus I, the Byzantium Emperor (527-565), this big underground water reservoir is called as “Yerebatan Cistern” among the public because of the underground marble columns. As there used to be a basilica in the place of the cistern, it is also called Basilica Cistern.

The cistern is 140 m long, and 70 m wide, and covers a rectangular area as a giant structure. Accessible with 52-step staircase, the Cistern shelters 336 columns, each of which is 9 m high. Erected at 4.80 m intervals from one another the columns are composed of 12 rows, each has 28 columns. The case-bay of the cistern is conveyed by the columns through arches. Majority of the columns, most of which is understood to have been compiled from the ancient structures and sculpted of various kinds of marbles, is composed of a single part and one of it is composed of two parts. The head of these columns bear different features in parts. 98 of them reflect the Corinthian style and part of them reflect the Dorian style. The cistern has 4.80 m high brick walls, and the floor is covered by bricks, and plastered by a thick layer of brick dust mortar for water tightness. Covering 9,800 sqm area in total, the cistern has an estimated water storage capacity of 100,000 tons.

Except couple of the edged and grooved columns of the cistern, majority of them are shaped as a cylinder. Two Medusa heads, which are used as supports under the two columns at the northwest edge of the cistern, are the great work of art from the Roman period. What attracts most attention from the visitors is that the structure from which the Medusa heads have been taken is unknown. The researchers often consider that it has been brought for being used as supports to the column at the time of construction of the cistern. However, this has not prevented myths for the heads of Medusa.

As the legend has it, Medusa is one of the three Gorgonas that are female monsters in the underground world in Greek mythology. The snake-head Medusa, one of the three sisters, has the power of gorgonising the ones that happen to look at her. Accordingly, Gorgone paintings and sculptures were being used for protecting big structures and special venues in that time. And putting the head of medusa in the cistern was for protecting purposes. According to another rumour, Medusa was a girl who boasted for her black eyes, long hair and beautiful body. She loved Perseus, the son of Zeus. Athena was also in love with Perseus and this made Medusa jealous. Therefore, Athena converted medusa's hairs into snakes. Now, everybody that happened to look at Medusa was gorgonised. Afterwards, Perseus headed off medusa and beat many enemies by using her power.

Therefore, the head of Medusa was engraved on the handles of the swords in Byzantium, and applied onto supports of the communes in reverse (so that the onlookers would not be gorgonised). According to another rumour, Medusa gorgonised herself by looking sideways. For this reason, the sculptor that made it generated Medusa in three different positions depending on the reflection angles of the light. The Basilica Cistern has been renovated repeatedly until today. It was repaired by the Architect Kayserili Mehmet Ağa during the reign of Ahmad III (M.1723) in the Ottoman Empire, followed by Sultan Abdulhamid II (1876-1909) in the 19thcentury. There are 8 columns in front of the northeast wall towards the middle of the cistern, and they were exposed to the risk of breaking during the construction works in 1955-1960, thus each of them were surrounded by a thick layer of cement, so they lost their previous feature though.

During the rule of Byzantium, the Basilica Cistern used to meet the water needs and requirements of the great palace that covered a wide area where the emperor resided, as well as the other denizens in the region. After conquest of the city of Istanbul in 1453, it was used for a little while and water was supplied to Topkapı Palace where the sultans resided. However, the Ottomans preferred running water over still water, and established their own water facilities in the city. It is understood that the cistern was not used thereafter and the western world did not notice it until the mid XVI century. It was in 1544-1550 when P. Gyllius, a Dutch traveller that came to Istanbul for making researches on Byzantium ruins was rediscovered and introduced to the western world. In one of his researches, P. Gyllius, while roaming around Hagia Sofia, managed to enter inside the cistern with a torch carrying in his hand by proceeding from the stone steps that went towards the underground from the backyard of a wooden building surrounded by walls situated on a large underground cistern as he was told that the householders there pulled water with buckets down inside the large round holes similar to well on the ground floor of their houses, and even fished there. P. Gyllius ranged around the cistern on a rowing boat under harsh conditions, measured it and identified the columns. The information acquired from his experience was published in the travel book, and Gyllius had influence on many travelers. 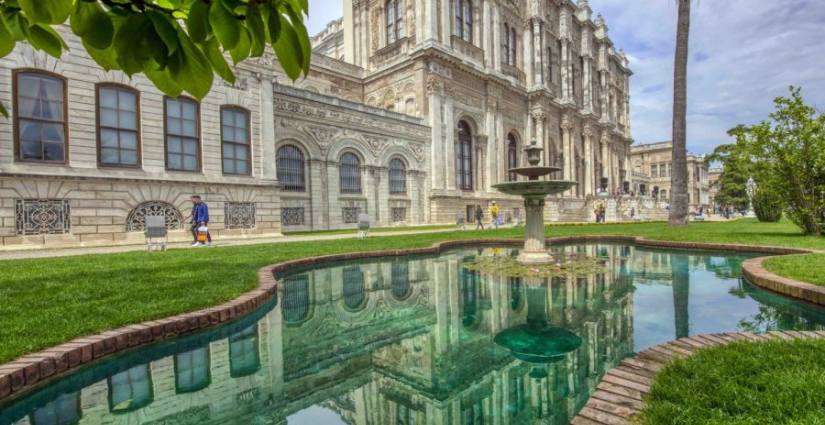 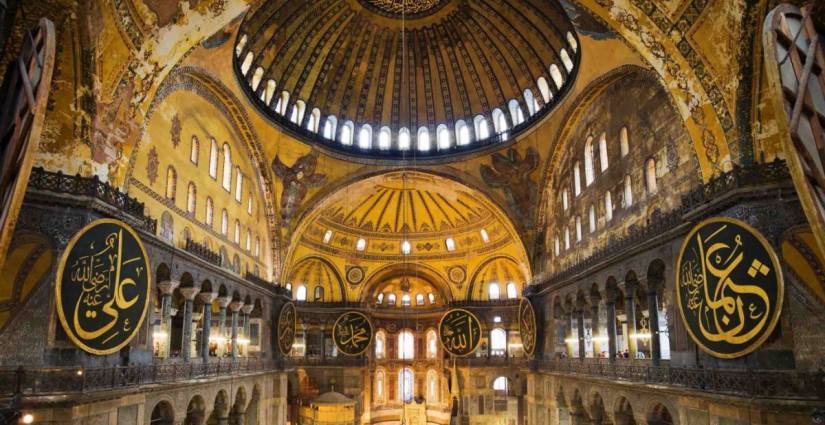 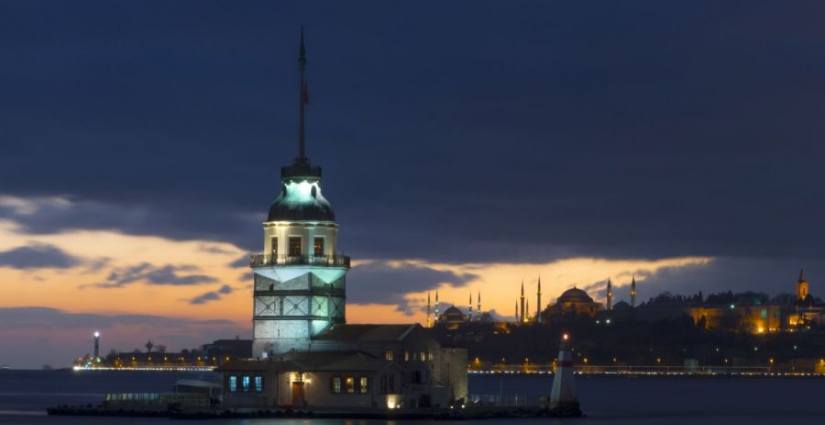 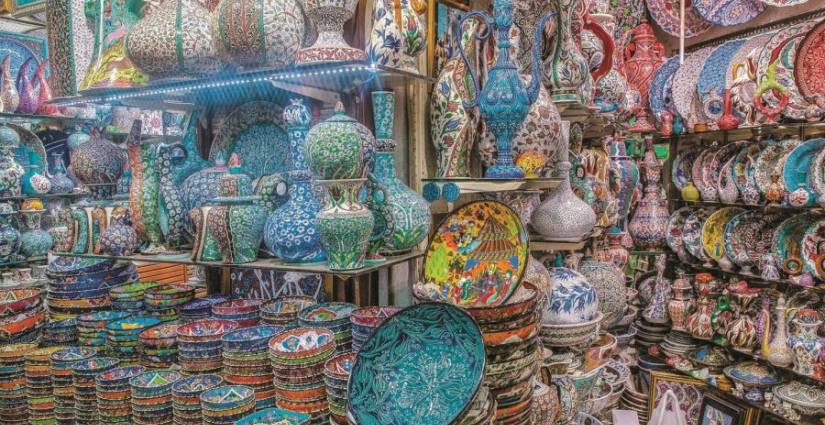